I guess I'm doing one of these too! My name is Kauko, and I am certainly a thing. I don't write very much anymore so I'm pretty rusty, but it should be able to explain some of Kauko's design, at least! 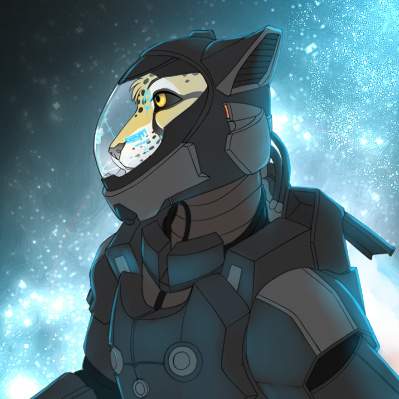 The Genetic Specialty Project was started to find a way to allow organic lifeforms to change their DNA pattern on command. In order to humanely (see: legally) develop the solution they came up with, several batches of constructs were created to be able to modify their given enhanced organic bodies.

And that’s where I began. My name is Kauko, and I’m one of the fourth generation of constructs that was made for this program. I wasn’t born in the natural sense! They needed subjects that weren’t born from parents, and since physical bodies could be synthesized they turned to artificial intelligence. Instead of being a pure “smart AI” that’s kept inside computer storage, my existence started out much the same, with the genesis of a new AI, “seeded with a sense of self” (what makes me me, I guess) and a standard education. A body was made for me by taking an optimized set of genes from 12 samples (in my case, all cheetahs,) and then the AI was mapped one-way into the body’s bare brain structure.

This combination of body and mind makes me (legally, at least) a living person instead of an artificial being, even if I wasn’t made the same way as almost anyone else alive that I knew of. I think it makes me rather unique. The organic mapping means I’m no longer an “AI”, even if I was made that way. I do think of myself as artificial, but I’m not nearly as intelligent! I’m not even good at remembering what I had for breakfast yesterday. Let’s not even talk about math.

I don’t remember any of this, but I was told the first thing that happens after we’ve awoken is identity creation. I chose my own name, and showed I didn’t side with any given gender. All our bodies were made sexless to keep this from being a problem before we could do something about it, but I decided to stay that way throughout the program. And some time later, after I agreed to start and was given the ability to control my own form in my free time, I kept my “parent” species (some changed theirs) but took on king cheetah’s markings by default. I felt it was more suited to my nature, of what I was. And a cute joke, I suppose, on the whole thing about being able to be whatever I wanted.. that I would take on a genetic defect.

An interesting thing about my body, all of my forms have this antenna pattern on the back of my neck. It's the receiver for the DNA changer, which is controlled by an external handheld device. I can't think my changes, which is a little disappointing!

After the testing ended, they offered me a job, but I declined. I sort of felt that after doing what they wanted me to do, I wanted to find out what I wanted to do. So I took money from the stipend I was given, bought a ship, and left home.

Newer, top of the line ships can pass The Gap (the anti-space that seems to separate our galaxy from the rest of the universe) but because of it, we’ve discovered very little of space beyond. It took almost a year of planet jumping and learning about new places to find the final place I’ve wound up. I’ve met a lot of interesting people and been many places.

I’ve learned a lot about myself since I left. I thought I wanted to be alone, independent, but I’ve come to find I prefer company, and that making my friends happy is more important to me.. finding more meaning in why I was created, not just a construct originally for testing some corporate project, but a toy, made to make people happy. I’ve more recently taken on the form of a female secretary bird, with the help of a close friend. The weird thing is, despite having the ability to do so built right in, I was changed through means I can’t quite understand, let alone explain. I don’t know if the manipulator system still works - to be honest, I don’t want to try it. I like myself this way, and the people I’m with. I’ve made a family. I’m home. 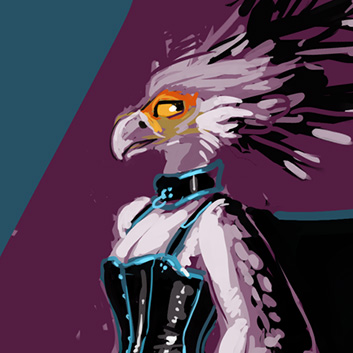